Evidence emerges of OVSD Trustee President Tarvin personally attempting to get someone removed from Facebook.

Recently, many Huntington Beach citizens have expressed deep concern with the fact that OVSD trustee president Gina Tarvin refuses to answer questions about the fact that many of her social media critics are being banned from Facebook, in some cases, simply for typing her name. But an interesting piece of evidence has just emerged that shows the elected official admitting to taking part in the reporting process that gets people banned from Facebook.

In a message sent to administrators of the OVSD Facebook forum all the way back on March 11, 2015, trustee president Tarvin not only appears to be gently accusing the admins of “condoning harassment” by allowing certain comments that criticize her, but also admits reporting the account to Facebook, due to her accusation that the account is fake. Problem is, she offers zero evidence that the person, “John Cambridge” is, as she states, “a fictitious alias set up by someone” to attack her. Here is the message:

Another obvious questions is, why is Tarvin concerned with aliases? She never expressed any concern when a good friend of hers, Pat Mahoney, a Nashville resident who is an executive for Man Head Merch, started the cyberstalking harassment site, Garbaginati.com. The site frequently invoked Tarvin’s name and she regularly spent time on the site’s Facebook page. Here is some proof: 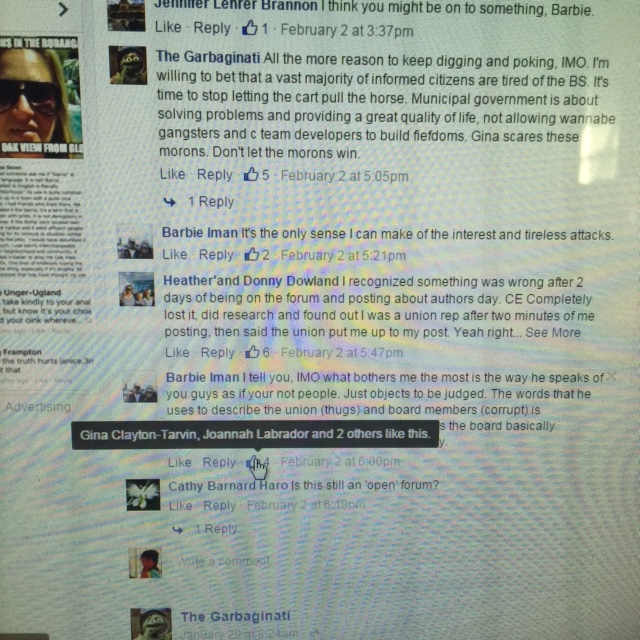 Many believe she was an active part of the site, which obsessively attacked myself and many other local residents. Tarvin would never denounce the behavior. Or explain her relationship with Mahoney. Yet in the recently revealed message, she takes deep issue with someone allegedly posting under an alias.

(Tarvin at left, Mahoney at right)

Once again, the trustee president appears to be playing two sides; against something when it hurst her, yet fully supporting the action when it serves her agenda.

For more stories on the people places in Facebook jail for daring to discuss the behavior of the controversial, embattled trustee president, I’ve written here, here, here, and here