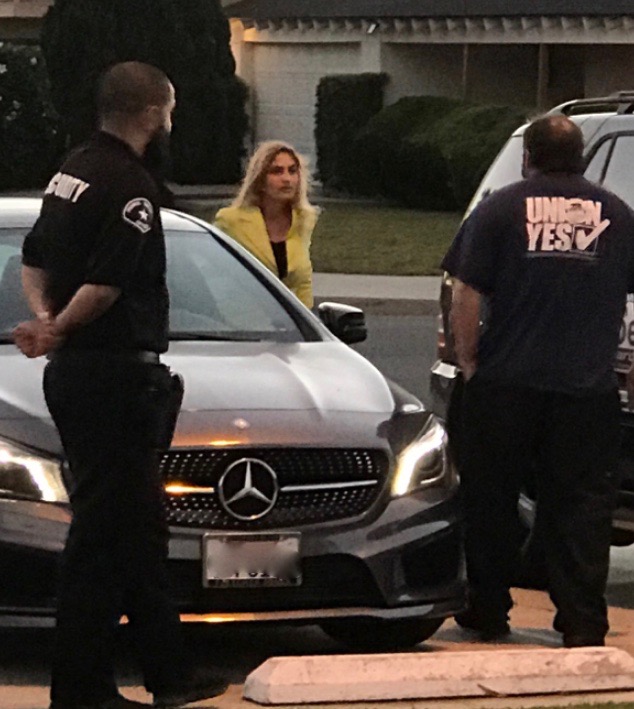 (Tarvin, center, is escorted to her car, despite no apparent danger)

JUNE 27: On a night at a school board meeting that literally saw virtually every single public comment tear into both she and the board, a grim-faced Gina Tarvin, Ocean View School District President, left the meeting with both a private armed security guard and a burly district grounds keeper.

At public comments, a number of residents, myself included, challenged Tarvin on the many social media “jail terms” being served for criticizing her. I mentioned at comments that I simply wanted to ask her on the record – yes or no – was she involved in the many online punishments being meted out. It seems the threat of that simple question may have caused her to actually ask for security detail to her car. I asked as she left if we might have a moment with her and she declined.

For once it was a relaxed scene outside the meeting; no police officers or bussed in radicals to speak on behalf of Tarvin. But as other board members, staff, parents, etc. milled about, chatting and laughing on this cool evening summer, a seemingly nervous and agitated-looking Tarvin was hustled out to her car by the pistol-toting guard and grounds keeper.

She was not threatened. She appeared to be in no danger. We simply wanted to know if she is involved in the dozens of Facebook “jailings” that have been mysteriously happening whenever her name is invoked by critics of the embattled, controversial district president.

Here is the video of Tarvin being escorted to her car by the security team.