Where Are The Other Schools? The Strangely Isolated Campaign of OVSD President Gina Clayton-Tarvin

Posted on November 11, 2015 by christianepting

Interesting message from a Surf City Chronicles reader this week: “Here’s a point I haven’t seen anyone bring up: why hasn’t the Huntington Beach Unified School District, or the administration at Ocean View High School, gotten involved in this Rainbow issue? They are right down the street from Rainbow. I believe that all high school age children living in the Oak View neighborhood attend that high school. If Rainbow is such a “threat” to these children, then why is only the administration of their elementary & secondary schools, involved?”

Good question, especially since both Trustee Briscoe and President Clayton-Tarvin now claim the scent extends beyond Goldenwest (Briscoe, incredibly, has said it even wafts as far away as HUNTINGTON HARBOUR). But given the Golden West accusation – where is Ocean View High School n all this? Nowhere. Not a peep. What about HBUHSD? Nowhere. Not a peep. Liberty Christian? Same.

If this was a TRUE health issue, would not these schools join forces?

To this point, why is Clayton-Tarvin driving this issue, essentially, alone? As she shared with a resident recently (while first seeming to excuse the public behavior of Trustee John Briscoe–behavior they later both publicly apologized for):

Why would other schools ignore such an issue? Or at least not support her on principle? Yet at the AQMD hearing held last Saturday, not one other school, or school district showed up to testify.

Not one to be dissuaded by his lack of concern from other schools in close proximity to Rainbow, Clayton-Tarvin seems to accuse Huntington Beach High School officials of being “in denial” over this issue. Another note to a resident:

“Gina Clayton-Tarvin: …This is not just an Oak View problem. Apparently the admin of HBUHSD are in denial on the conditions there. We need to highlight the nuisance there as well.”

While there is not yet any support on this issue from HBHS, there is a blizzard of taunts, tweets and organizing from Clayton-Tarvin that seem to paint her not so much as a school official, but rather a community organizing firebrand. Pretty much, by herself. But is it appropriate? Is it over the top? Is she going too far?

Several months ago, as a private citizen, she launched an anti-Rainbow petition. 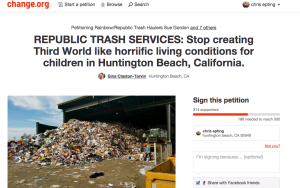 “Third world like horrific living conditions”? She also mentions: “One block from the trash dump are the Ocean View High School and Liberty Christian Schools.” Again, schools that have ignored this issue publicly.

But then, curiously, she posted her petition on Facebook – imploring Marina High School to support it. But she didn’t sign the plea as a private citizen–she signed it using the muscle of her OVSD board president title. Why? And what does that tell us? 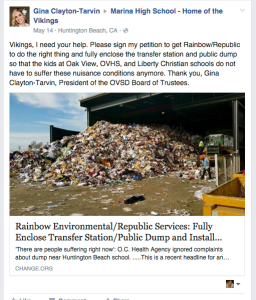 A number of times on line she has denied helping to promote Oak View rallys–except at the same time was busy appearing to support Oak View Rallys–in Spanish where needed.

While then speaking at those rallys (with out of town school officials) and tweeting about it.

What purpose did it have to say “The Oak View community has a lack of trust of government because of many with undocumented status.” I would love to see data backing that up before committing so many taxpayer hours/dollars to her efforts?

Also, “the community has very limited access to the Internet and few have telephones.” It would also be nice of the public could be provided data backing that up. But as she says, she is “advocating for the community,” not the school–the community.

Just as she addressed “The Community” here in giving direction about how to complain to various agencies: 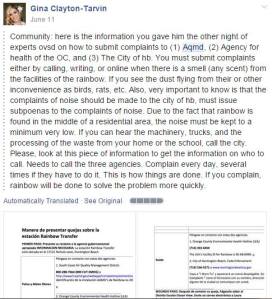 Note that she is telling people to complain, even if they simply hear a truck. And Rainbow is in fact located in an area zoned for industrial.

Clearly Clayton-Tarvin’s ties within the community go beyond any school-related activities. and according to an OC Weekly piece she has recruited acolytes to assist in her fight. If this were a city council member, as some have pointed out, it might not seem as if professional duty lines were being blurred. But again, a school board head? Are there no professional limits on activism or becoming a nearly full-time community crusader? Do other communities in her district get  attention even approaching this? Do any parents take issue with this? What exactly is she elected to do? 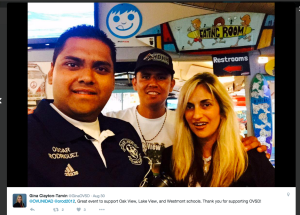 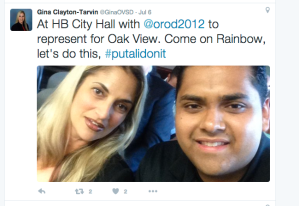 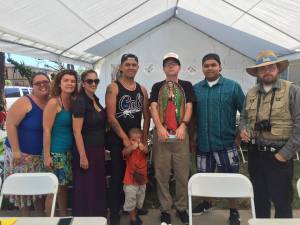 In terms of that last post, which was written not by, but about her, why is the Ocean View School District a “voice of the community” as opposed to “a voice of the school”?

And though she freely attacks other elected officials for not engaging as she would like them to (in this case Assemblyman Matthew Harper):

–she also picks and chooses who she engages with. Since last May, I have not had one message returned from her. Other citizens have been ignored as well.

As well, several months ago, she began tagging @BillGates in her tweets and posts, due to his role as a shareholder in Rainbow/Republic.This no doubt has led to neighborhood activists calling out Gates as (evidenced by) signs portrayed at last Saturday’s meeting:

But how does she justify this tweet of hers right before that same meeting?

Gates does not “own” the “dump” and it certainly does not, by any measure appear to be “50ft from kids” at any point. More over-the-top language. More personal, extreme tactics to seemingly go after someone’s integrity.

What is driving this relentless, single-focused campaign of hers? Is it, as she insists, all about “the children?” Or is something more going on that we are not privy to? New “tactics and strategies” she has referred to at other times.

And, getting back to the original question – why are all of the other schools, which by her measure should certainly be affected, not joining in? There are high school kids in the Oak View neighborhood that no doubt attend OVHS. So where is that school in this fight?

On the heels of tomorrow’s hearing conclusion, I think many people would like to know exactly what is driving Miss Clayton-Tarvin. And why there is so little support behind her from other schools and officials beyond just the Oak View neighborhood.

And if tomorrow the AQMD and Rainbow/Republic come to terms on abatement–do the lawsuits all go away?

5 thoughts on “Where Are The Other Schools? The Strangely Isolated Campaign of OVSD President Gina Clayton-Tarvin”