Posted on February 15, 2017 by christianepting

As the LA Times reports today, “Rep. Dana Rohrabacher (R-Costa Mesa) said a 71-year-old staff member was knocked unconscious Tuesday while protesters gathered at his Southern California office… They were jammed outside the door and the moment Kathleen cracked the door someone yanked it open,” Rohrabacher spokesman Kenneth Grubbs said in an email. Staunton was treated by paramedics and taken to a hospital “after falling into unconsciousness,” according to a statement from Grubbs. She had a 2-inch bump on her head, Grubbs said.”

The group of activists, known informally as “Resist OC 48”, for weeks has been demanding that the congressman meet with them via a townhall meeting. The group organizes primarily within a private Facebook group, and leaks from within reveal a coordinated, aggressive and deeply angry underground movement that planned yesterday’s confrontation as a “surprise” on the congressman’s office: 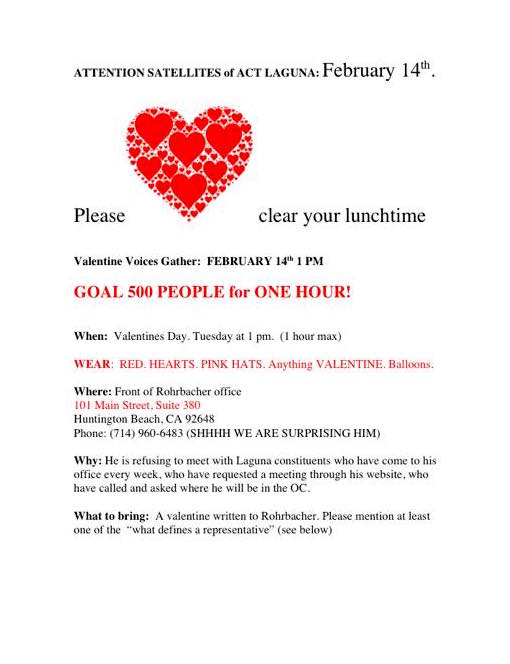 (note: his name is spelled incorrectly on the piece)

Additionally, the group created a series of “Valentine” messages emblazoned with infamous Russian mass murderer Joseph Stalin, creating a pun off of his name: 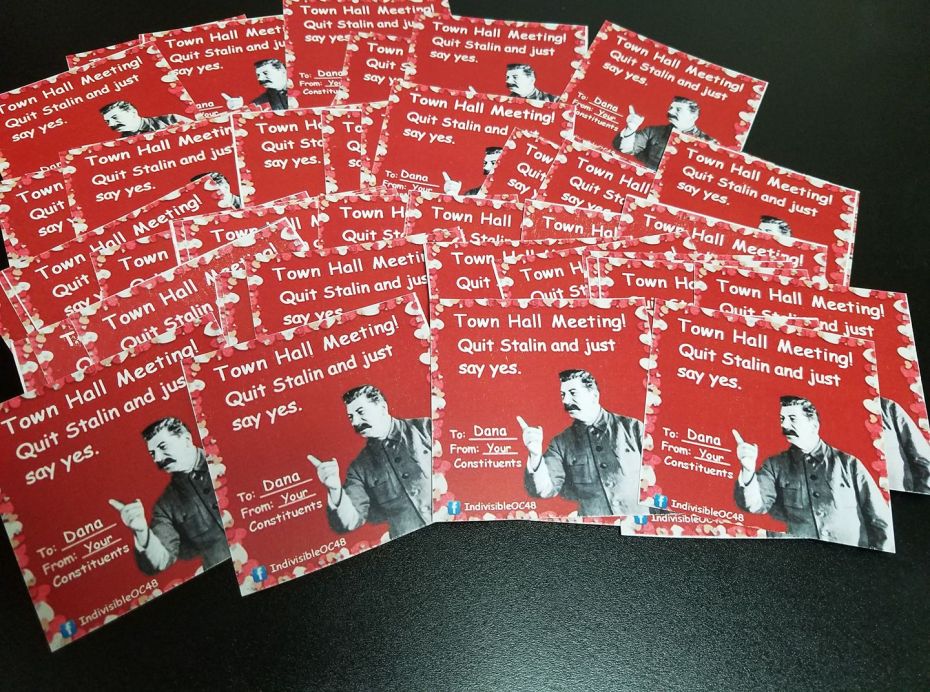 The group is part of another, announced protest march on the congressman’s office on Monday February 20. Judging from some posts within the group from one of its more vocal members, they are not concerned about the negative press today, also covered by the Orange County Register. Quoting Angela Rainsberger from the Facebook page, “Actually, I think it is great press for us because it is clearly false, I meant an alternative fact based report. We have nothing to be concerned about. People should never be afraid of lies or staged events like this. We are peaceful and have plenty of evidence to disprove unfounded accusations. We are living in a world of alternative facts now, but the truth is self evident.”

After the incident, the congressman’s office released this statement:

Rohrabacher Outraged by Assault on his District Director by ‘Indivisible’ Mob

WASHINGTON – Protesters swarming the corridor outside Rep. Dana Rohrabacher’s Huntington Beach, CA, office Tuesday knocked unconscious the congressman’s district director, who was hospitalized after falling into unconsciousness. In the tumult, a two-year-old girl apparently brought along with the crowd was also hit by a swinging door.

When Kathleen Staunton, 71, who has managed the congressman’s office since his first term in 1989, attempted to exit through the front door to visit a restroom in the downtown office building, a protester yanked the door open, causing her to fall and hit her head. The door also pushed over the child, who was reportedly uninjured. Staunton was treated by paramedics and taken to a local hospital.

The protesters were part of a nationwide movement calling themselves Indivisible, who have vowed to resist President Trump’s agenda by trying to occupy Republican congressional offices, often demanding “town hall” meetings with the lawmakers. This action was billed as a Valentine’s Day event with Rep. Rohrabacher, even though the congressman was working in Washington with the House of Representatives in session.

I am outraged beyond words that protesters who mobbed my Huntington Beach office violently knocked down my faithful district director, Kathleen Staunton, causing her to be hospitalized. And, yes, deliberate or not, the incident came as part of a mob action that not only intimidates but coerces. Though the protesters think of themselves as idealists, they engaged in political thuggery, pure and simple. These people do not want, as they’ve claimed, to hold a town hall meeting with me. These are unruly activists on whom the lessons of civility and democratic participation have been lost. They have repeatedly disrupted the normal operations of my district office, preventing my staff from serving constituents with real needs, such as veterans’ and social security issues. They are part of a nationwide, anti-Trump mobilization, whose organizers call themselves, with supreme hypocrisy, by the name “Indivisible.” In fact, they are bent on dividing the nation, defying the will of voters and undermining the legitimacy of the election. These holier-than-thou obstructionists will be held responsible for this outrageous assault. They are exposing themselves for what they are — enemies of American self-government and democracy.