Posted on September 20, 2016 by christianepting

AS OF 2:30 PM ON THURSDAY, SEPTEMBER 22 – THE NAME OF COUNCILMAN ERIK PETERSON HAS BEEN PULLED FROM THE OFFICIAL CAMPAIGN WEBSITE OF GINA CLAYTON TARVIN. WE HAVE REACHED OUT TO HER FOR COMMENT AND WILL UPDATE IF/WHEN WE HEAR BACK.  IT SHOULD BE NOTED THAT LONG BEACH COUNCILMAN AL AUSTIN’S NAME HAS ALSO BEEN REMOVED. 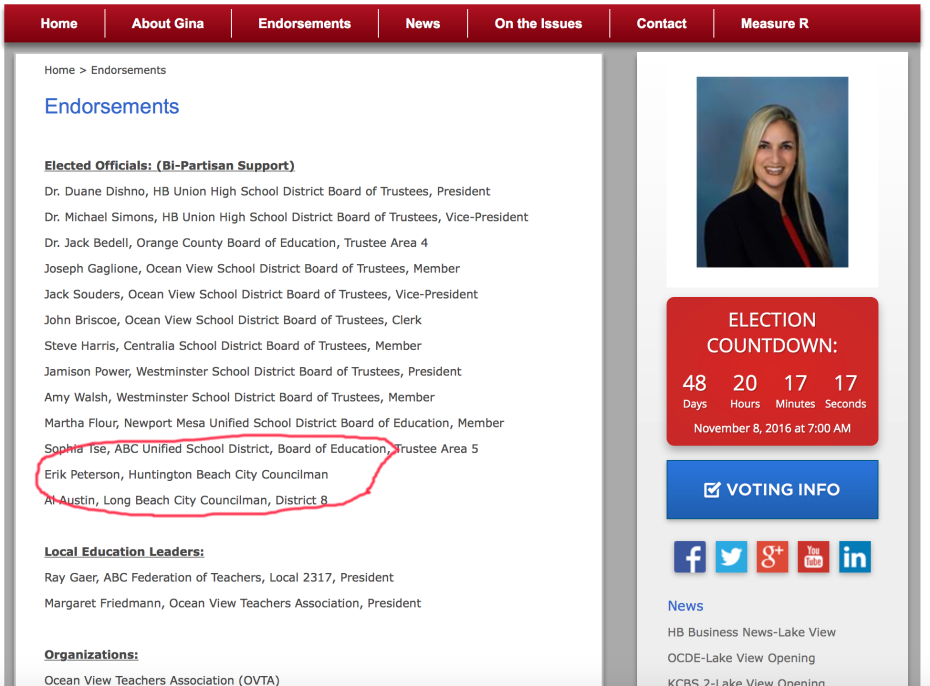 Recently, the name of Councilman Eric Peterson has been listed on Gina Clayton Tarvin’s official campaign page (Tarvin is running for School Board Trustee).

This raised more than a few eyebrows within some conservative groups in Huntington Beach, who were taken aback that a staunch right-wing advocate like Peterson would throw in with someone that, in many conservative eyes, is a left-leaning community organizer.

At Monday night’s 9/19 City Council meeting, a resident named Chuck Johnson spoke at public comments about the issue and queried Peterson for an answer (which  by rule he is not allowed to give during public comments from the dais).

I myself have reached out to Peterson for clarification via email but have not received a response. However, in the last 72 hours a number of sources have contacted me citing first-hand that Peterson told them personally that no, he has absolutely not given the endorsement to Tarvin.

I have also reached out to Tarvin for clarification but have yet to receive a response.

As of this writing, the endorsement remains on her official page, ginaclaytontarvin.com.

UPDATE: Another new source has confirmed that Peterson has NOT endorsed Tarvin.