Posted on October 23, 2017 by christianepting Former OC Weekly editor Gustavo Arrelano, pictured above with Huntington Beach radical community organizers Victor Valladeres (center) and Gina Clayton Tarvin (who also happens to be a school board trustee president) gave a hard-to-believe version of his ouster to podcaster Tom Leykis on the day he was allegedly ushered out of the offices by security: that he resigned when the paper demanded he cut staff. Would he really toss a career playground away over that? Wouldn’t he then lose unemployment benefits for quitting? And why was the new editor not required to do the same thing? Arrelano, strangely, would only speak to Leykis, denying other media queries.

This is a piece of Arrelano from the show that day a week and a half ago:

ARRELANO: They (the OC Weekly owners) never questioned our coverage, though I do have to say, we did our US Open of Surfing coloring book, and one of the illustrations was  the Huntington Beach police beating up a rioter, so the guy was like, ‘Why did you have to do that?” and I said – do you not know OC Weekly? We’ve been out before with the Huntington Beach Police Department, a bunch of trigger-happy, drunk-ass corruption apologists for 22 years. They despise us-we rip them specifically because, more and more  it’s the truth! And more importantly because all these cucks would be triggered with (mocking tone) “Oc Weekly is anti-cop, respect the badge blah blah blah ” – fuck them! Fuck them – we only report the truth. And a lot of people don’t like the truth nowadays unfortunately but as long as I was there and as long as Nick’s there that’s all we ever told, the damned truth.”

For those following Arrelano’s couple-of-year descent from a smart subversive journalist into a seething, foul-mouthed, Trump-obsessed social media troll, many mark a feature he wrote on an HB bunch of radical community organizers called Oak View Comunidad as a possible beginning of the end. It was catnip for Arellano, who more and more seemed to evolve less as simply an immigrant activist into a full-blown “Professional Mexican,” using his ethnicity as a cheap hook and hammer to pull in topics and then blast any/all critics as “racists,” “Chavalaxs,” “Pendejos” and worse.

Another clip from the Leykis appearance…

GUSTAVO: What’s up, man? Oscar Rodriguez, ladies and gentleman. A great activist going down at Oak View barrio and just because him and his friend Victor Valladeres, whose been on Tom’s show, just because they dare be Mexicans who don’t want to be peons in Huntington Beach, they are some the most loathed people in Huntington Beach – if anyone has problems with Oscar and Victor, FUCK YOU, fucking Chavalas, straight up – you’re only scared because these people don’t want to be your fucking dumb-ass Mexicans, and they dare talk against your fucking dumb-ass shit.”

Not sure when the Edward R. Murrow awards for journalism are handed out, they may want to flag this exchange for special recognition.

Arrelano, whom I was friends with at that point (he had written some nice pieces about several of my books and fairly covered my fight to save fire pits), took issue with me calling out Tarvin and her rabid mob of followers. When I let him know that she had directly been calling my editor at the LA Times to help have my voice silenced, and that SURELY I thought he would take issue with a politician doing that, he wrote me saying, “You are losing perspective. Asshole politicians who attack and smear reporters? Join the club.”

Ok, his spineless excuse making aside, he clearly has Tarvin pegged for what she is, but when I called out her two flunkies Oscar Rodriguez and Victor Valladeres for ludicrously applying their term “environmental racism” against Rainbow Environmental, he suggested I go back to school to take Chicano studies courses. In a follow up column, he tried walking that comment back by saying,  “I jokingly suggested to Epting in the comments of his column that he take a class in Chicano Studies at Golden West College to better understand where Rodriguez and Valladares were coming from,” but he most certainly was not joking when he said it.

From there, Huntington Beach became part of Arrelano’s obsession. How tied in directly did he become with Oak View Comunidad? Hard to tell. Several CPRA requests clearly create links between he and Tarvin, he refused all of my questions regarding his collusion wth her, and he soon hired Victor as a sort of lackey/intern, hired to hand out posters at an anti-Trump rally (featuring the Weekly cover that week of a donkey having sex with Trump). Then came the passing out of Trump pinatas to an angry mob and within days, Valladeres, out of shame it seems, had to resign from a city appointeeship (throughly embarrassing councilman Erik Petersen, who had appointed him). To many, it seemed like Arrelano used Valladeres to create a clickbait story for the Weekly of the chaos they helped create at the protest. Gone was the journalist it seemed; enter the hustling race baiter.

Then came the feature articles, the taunting of HB locals, and the Facebook trolling (using the OC Weekly handle for many of the baseless, vulgar attacks). Here’s an example – “Huntington Beach Mexicans”? “HB Losers”? Uhm, ok. 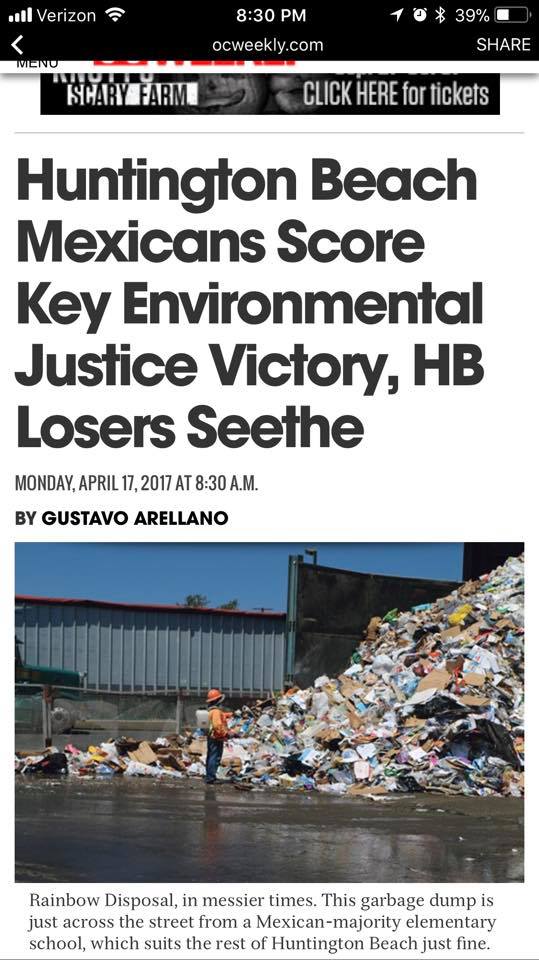 The paper helped promote the cop killer vigil on the pier in the summer of 2016. Yours truly was named “one of the Scariest people in OC” for calling out the people that celebrated the cop killer, and then of course he took huge issue when some locals, so fed up with his taunting and attacks, began trashing the actual paper as a direct reaction to his reckless, wild-eyed attacks.

Worse, when the HBPD actually flagged errors in his reporting, he would do nothing about it. It’s as if he was throwing away all journalistic integrity in the trash for the sake of supporting his now toxic, obsessive habit of targeting Huntington Beach. You almost have to wonder – did he WANT to get fired? 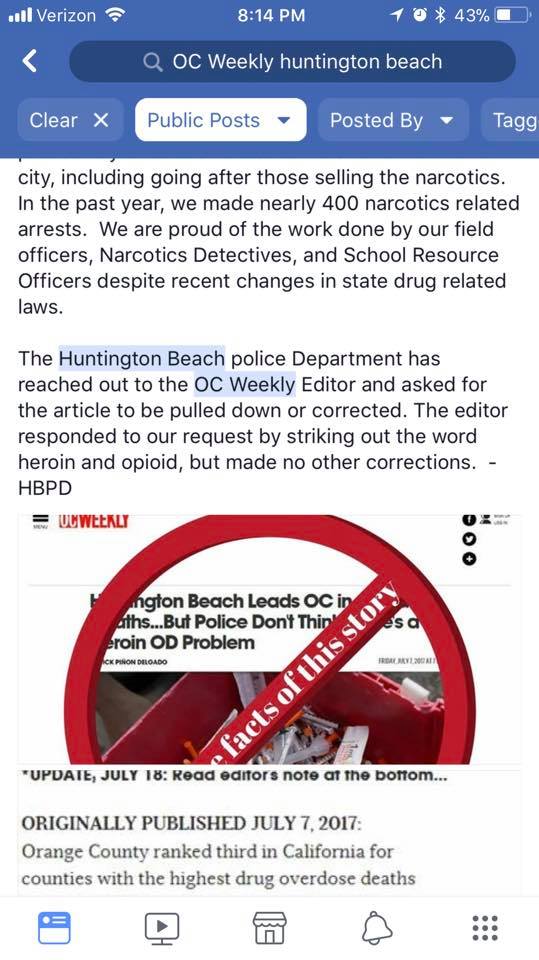 Recent Reddit commenters seemed to have a sense of what had become of Gustavo, and had little love for his unprofessional antics:

“I remember this one OC Weekly story, and the argument it was making was totally undermined because it got the facts completely wrong…When readers politely pointed that out the facts were wrong in the comments section, any adult in the room would have verified those facts and then amended the original story like you see other journalists do. (Maybe, you would have to rewrite that story because the central premise was so wrong.) Instead, Gustavo, who didn’t write that particular story, responded in the comments section by attacking the readers who pointed out the factual inaccuracies as whiners, pendejos, and people with nothing else better to do.  And, then he ended his tirade by saying how he didn’t care about the facts as long as it brought the page clicks.”

“Go to the OC weekly Facebook and look at the comments on articles that he posts. The guy’s existance seemed to revolve around race baiting.”

“I remember one where i pointed out something that was to me completely valid. Gus chimed in and called me a chavala – i lost a little respect for the guy then…”

“I don’t think anybody likes to see other people get laid off, unless you’re Gustavo Arellano who gleefully cheered on the layoffs that hit the OC Register.”

And this apparently was his final F-you to the city he hates:

We may never know the real reason Arrelano is no longer at the Weekly, but I for one believe that at least some of the dissatisfaction the paper’s owner, Duncan Macintosh may have felt toward Arrelano stemmed from his obsessive hate toward Surf City. And I also believe that Arrelano’s embarrassing, scorched earth Leykis appearance may keep him unemployed for some time. It’s one thing to have opinions, it’s another to abuse your editorial power and hijack a newspaper into your own personal attack platform – and then go out in such a blaze of vulgarity and seemingly maniacal hatred of so many things.

Whatever. Hopefully one day Gustavo Arrelano will rediscover his roots as a fair, thoughtful and honest writer, as opposed to the angry, agenda-driven smear merchant he became – a person who used his race as a business card.  Whatever happens, it certainly seems that HB was his trigger, and he still can’t let go. Here is a recent Tweet (Twitter had actually recently banned Arrelano, presumably for his extremism).

2 thoughts on “Former OC Weekly editor on Huntington Beach Police: “A bunch of trigger-happy, drunk- a$$ corruption apologists!” Did Gustavo Arrelano’s obsessive hatred of HB help cost him his job?”